A simple guide to what's going on in Anaheim...

The bracket is set and the Big West Tournament begins on this week. Here is some answers to questions you may have:

When and Where is the Big West Tournament being played?

The Big West Tourney is being played at the Honda Center (home of the Anaheim Ducks and also of the 2014 West Regional games for the NCAA Tournament). It will take place Thursday, March 13 - Saturday, March 15.

Is there any way I can watch these games?

Regionally, you will be able to catch all of the games, as Fox Sports Prime Ticket (that's the second Los Angeles FS channel) will be showing the quarterfinals on Thursday. The semifinals will be broadcast on ESPN3 and ESPNU, and the final will be shown on ESPN2.

So who's actually in the Big West Tournament this season?

The order, by seeds:

UC Davis got the short end of the stick, and had to stay home. That being said, the Big West is a very geographically localized conference (save for Hawaii), so at least half of the teams can go home to their own beds every night.

Thanks for the seeds, but what are the actual matchups?

Who has a "home team advantage" if there is one? 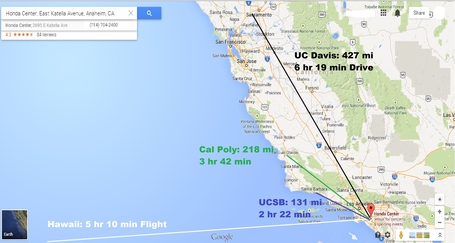 As you can see, Cal State Fullerton is the closest to the Honda Center. However, expect to see a multi-collegiate crowd in the stands.

Who's favored to win? Are there any dark horse candidates?

UC Irvine and UC Santa Barbara are by far the two favorites to win the tournament (and I would give Irvine the edge). Fun Fact: if UC Irvine does win, they will have made the Division I NCAA Tournament for the first time ever.

This conference has been so close in general, that TeamRankings.com Big West projections show that every team has some sort of chance to win the tournament (yes, even UC Riverside at 0.83%). If I had to pick a true dark horse, it would be Cal State Northridge, who has beaten every team in the conference once this season except Cal Poly (totally weird).

Anybody in particular I should be watching?

Alan Williams of UC Santa Barbara ranks 12th in the nation in scoring with 21.6 PPG and is tied for 1st in the nation with 11.6 RPG. If the Gauchos win the tournament, he's the reason why.

I'm going to the tournament, what else is there to do in Anaheim?

Disneyland and California Adventure are five minutes away. Next question.

That's all for now: keep reading Mid-Major Madness for continued coverage of all the mid-major tournaments.