Essay: From American U., With Love

After spending half a decade in the biggest of the big leagues, I came back to Bender Arena

Share All sharing options for: Essay: From American U., With Love

Ed. Note: Matt Brown is one of the college league managers and cut his teeth over at Land Grant Holy Land. But before selling his soul to the realm of big money, big football, and Big 10, he was a freshman at American University in Washington, D.C. He returned to American on the final weekend of the regular season to see what it was like to step back in time.

I've spent the last few years spending most of my time in the halls of the biggest of the big budget programs. I'm an Ohio State graduate, and have been mostly writing about Ohio State and other Big Ten schools over the last couple of seasons. But that wasn't always my life. I spent my freshman year at American University (2005-2006), in the illustrious Patriot League, before transferring. Thanks to a new job, I found myself back in Washington, D.C., and decided to check out a game, to see how the school and team had changed, and for a reminder of what college basketball is like for the majority of teams in D1.

You can be forgiven if you forget you're walking onto the home court of a potential NCAA team when you visit Bender Arena. It's small (capacity: 4,500), and many of the trappings feel more high school than college. It's the only gym on campus for undergrads, so when the hoops team isn't using it (or another event), frat bros will play 21 on the same court.

When I walked into the lobby, I accidentally interrupted a rousing game of Tag from a bunch of 5-year-olds. The upper level of the arena has a few stands with people selling stuff like candy bars and hot dogs, and 30 minutes before tip off, the place was nearly completely empty, save for the pep band, the cheerleaders, and a guy from GEICO who gave me a free American hat for being "one of the first 1,000 fans". Cool. 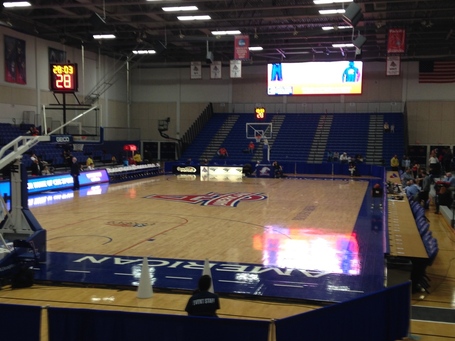 I played in that pep band the last time I was here, during the 2005-6 season. I remember the group having about 25 members on a good day, and we with a sound quality that was absolutely worse than a replacement-level high school band.

My last game at Bender, against Holy Cross, I was actually nearly thrown out of the arena. The place was at least half empty, and in an attempt to try and create some home court advantage, I tried wailing on the bass drum of my drum set during free throws. This is apparently some sort of NCAA violation, as a screaming AD official tried to explain to me in between profanities, and Holy Cross got to actually reshoot a free throw. Thankfully, the Eagles sucked that year and weren't going to win the game anyway, but for some reason, I wasn't asked back for the home finale against Navy.

The current AU pep band looks a little larger, and a little snazzier (Nike, it appears, outfitted them with matching jerseys), but with one exception, they still suck, which oddly make me feel a little happy. The band did add a BAGPIPE PLAYER, who rocked out with the drummer late in the second half, something that could probably only happen at a school like American. Quirks like that make smaller college hoops awesome. 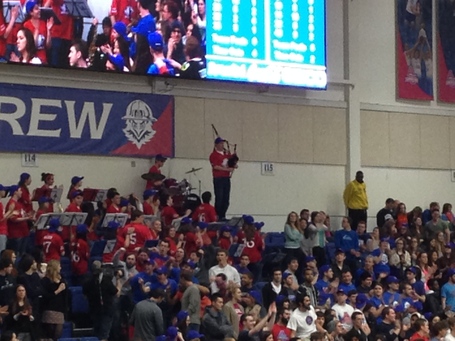 A crowd started to quickly fill in. Some AU grads around my age shuffled in behind me (the school is small enough that we quickly discovered we had mutual friends), along with a lot of children, and older folks. As you'd probably expect, this was much more of a family atmosphere than you might expect at a bigger school, but that doesn't mean that there weren't a few superfans ... like this gentleman, sitting in front of me, repping perhaps the most famous American Eagle of them all, Kermit "Falcon Punch" Washington. 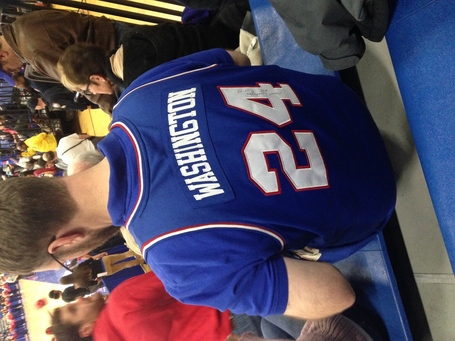 The game itself started off fairly uneventfully. American runs a deliberate, Princeton offense, so you weren't going to see an up-tempo, out-in-transition game. The Bison had a size advantage and were able to keep American out of the paint, turning the match into essentially a jump shooting contest, albeit a closely contested one. In the second half though, our section became aware of American's No. 20, who quickly became No. 1 in our hearts.

The American University website lists No. 20 as Charlie Jones, a freshman guard/forward from Manchester, Md. He is listed at 6-5 and 185 pounds. I'm willing to believe that Jones is 6-5, but there is no way in hell he's even 185 pounds soaking wet.

Even compared to the other Patriot League players on the court, none of which are likely to be confused for say, David Robinson, Jones looked like a church baller, not a Division 1 basketball player. His goofy shirtsleeves did little to mask how impossibly skinny he looked.

So naturally, I loved him, and so did everybody in my section.

Jones was easy to root for. He certainly didn't play like somebody who should probably be eating a peanut butter and jelly sandwich every 90 minutes. He went up for every rough rebound, grabbing two of them, was often first on the floor for a loose ball or steal opportunity. He found himself in the paint in matchups where he was giving up 25 pounds (that is, if you believe his listed weight). We desperately wanted him to score.

A team that moves the ball around as well as American tends to create a lot of open looks, but throughout the first half, Jones was afraid to take any. Even if no Bucknell player was within four feet, Jones was likely to jab step, or work the ball around, instead of taking the jumper. A quick look at the stat sheet would show this isn't a surprise (Jones averages only two points per game), but that didn't deter me and my new found friends. Eventually, every time Jones even touched the ball, we'd all scream "SHOOT IT".

The 2013-14 Patriot League season was a wild and crazy ride from American's hot start, to Boston University's strong finish. Who will be the tournament champion and represent the league in the NCAA Tournament? We will find out starting March 3.

And then, with 8:40 remaining in the game, Jones finally let one fly. The ball probably touched every part of the rim on its way, before dropping through. The church baller hit a three! I jumped up, screamed, and flew into the high hive frenzy in my section, legitimately more excited than I had been at a college basketball game in a while. Jones would even follow up with an encore, hitting a second three-ball, four minutes later.

I didn't realize that this was a comparatively rare performance until later. Jones had only hit a 3-pointer in two other games this entire season. His season high? Eight points, against Lafayette. I picked the right game to attend.

Unfortunately, the rest of the Eagles weren't so efficient on offense. While Jesse Reed, who should be a very nice player for American next season, had a nice game, (16 points on 5-for-11 shooting, and seven rebounds), the rest of the team struggled badly from the floor. Not a single American starter hit a 3-pointer (which is a problem when the starting five combines for nine attempts) and leading scorers Darius Gardner and John Schoof shot a combined 3-for-18 from the floor. The Eagles were in the game the entire way (although trailed for pretty much the entirety after around the 13-minute mark), but, as the cliche goes, just didn't make enough shots.

It's always disappointing to lose on your Senior Day, but all things considered, American has to be pretty happy with where they stand. The team was picked in the preseason to finish near the bottom of the standings, and their early season performances (their game against Ohio State notwithstanding) probably did little to convince folks otherwise.

Then American ripped off 11 wins in a row, including a blowout of Boston University that was so dramatic that the Eagles unlocked unlimited turbo AND George Clinton afterwards, setting themselves up for the second seed in the Patriot League tournament. American has a real puncher's chance of stealing an NCAA bid this season, and if not, returns the bulk of their team for next year, and could make a run at it again.

Hopefully they do, because Bender was a really fun place to be. Even at maybe 80 percent capacity, it got legitimately loud at times, and the student section was engaged. American isn't really a participatory campus; its students are typically more concerned about internships than campus life (I asked multiple people, and nobody could really name a single American U. campus tradition, and I heard way more people discussing the situation in Ukraine, clothes, or investment advice on campus than the game). Anything that can help bring people together a little more could go a long way towards making the school a better place.

And really, isn't that the point, at this level? Barring a miracle, or some super shady-as-hell boosters, American isn't ever going to make a Final Four. It might not win an NCAA game for decades. It's certainly never going to be a profit center for the university, just like at any Patriot League school.

But it can help bring people together, and even though they lost, Bender was rocking that afternoon. The team has a bright future ahead of them, and could just be scratching the surface of what is possible there.

An hour later, as I was riding the bus back to my apartment, I caught myself humming a tune that I thought I had forgotten completely, buried deep in my subconscious, long after throwing my allegiance to the Buckeyes. All hail the mighty A-U Eagles...when there's a fight we'll see it throughhhhh. It was the AU fight song.

That has to be a win for the school. And at this level, you'll take every one you can get.

Matt Brown is the Managing Editor for Land Grant Holy Land and a League Manager for SBNation. He can be reached at @MattSBN