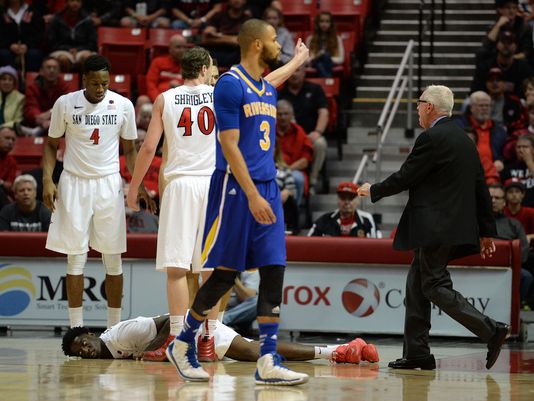 Big West Conference representative CS-Fullerton should find it easy to continue their success on the road against SUU, currently 5-0 all-time against the Thunderbirds. In their last meeting Fullerton crushed SUU by a score of 112-69 in 2012.

Three games into the season Fullerton finds itself feeling pretty good, especially Titan’s freshman guard Khalil Ahmad who has scored double figures in each of its first three games, including 11 points on 3-of-3 three-point shooting in its home opener against San Diego University last Saturday, winning 67-55.

Feeling good is a rarity for Fullerton who has finished out of the top 5 in the Big West in each of the last three years and out of postseason play last year, finishing last in the BW. Its best finish was in 2011 when it landed the No. 2 spot into the BW tourney, but lost in the first round.

For Fullerton it’s all about continuing any success and carry any positive feel into conference play starting in early January.

Another win less team for a Big West team. UC Riverside will try to take the sour taste out of its mouth from its last lost Saturday, to San Francisco University, 58-57.

Riverside lost in the final seconds of play when it allowed six points in the final 40 seconds. Riverside was hoping to go 3-0 for the first time since the 1996-1997 season.

Making a case for the best player off the bench in the Big West is junior Makil Thames who put up all 15 of his team-high total on three-pointers against SFU and played 32 long minutes off the bench.

Expect Thames to plead his case to stay on the floor against a struggling DSU Hornet squad who has been in ever single game, losing by a margin of only nine points.

The Hornets will make it interesting but the Highlanders with the home court advantage will keep DSU win less.

Davis has bounced back from a heartbreak loss in overtime to North Dakota State 79-71 in its season opener. Since then it's had a pair of superb double-digit wins against Portland University and Fresno Pacific.

This will mark the 113th time the cross town rivalry will fight for the Casueway Cup trophy. Sac. State will make it difficult for Davis, as the Hornets come off their best overall record (21-12) and a (13-5) Big Sky record last year, making it first postseason appearance since 1991.

In the last 12 seasons the Aggies and Hornets have split the Causeway Cup six apiece. SSU at home has won four of the last Causeway Cups at home and part of their success comes from having experience, returning 10 players and three starters in senior guard Cody Demps, junior center Eric Stuteville and junior Nick Hornsby.

Davis had big success in the regular season with All-American Corey Hawkins. Hawkins was ranked No. 1 in the NCAA in three-point field percentage (.488) and No. 7 in points per game (20.9), this allowed Davis to extend coach Jim Les’ contract to the 2020 to 2021 season.

This year for Davis it's an inside game instead of a streaky three point ball from Hawkins, forward Josh Fox leads the Aggies in scoring with 17 points per game.

The Causeway Cup is a big deal in Sacramento, a battle for the state capital of California.