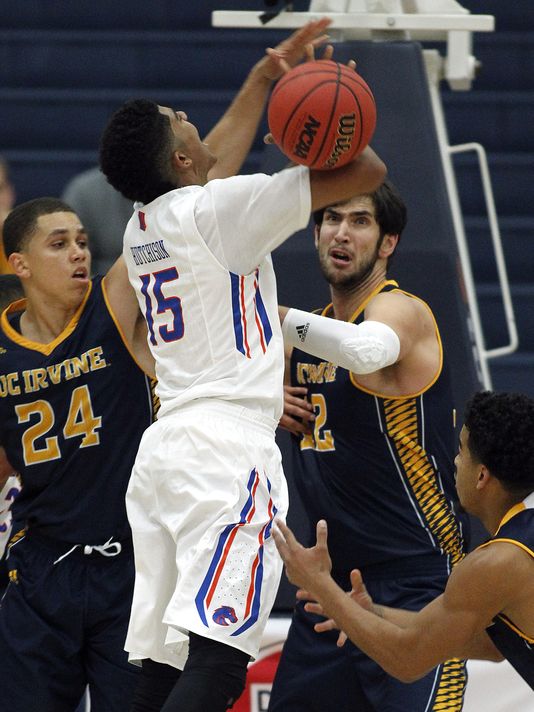 Hawaii fell apart in the later part of the game against Texas Tech as the Rainbow Warriors led the majority of the first half.

It was a combination of accurate free throw shooting from the Red Raiders that put the game in favor of Tech. Tech made 30 of 38 FTs as Hawaii shot 67 percent from the free throw line.

Hawaii had a pair of 20 plus point scorers in guards Aaron Valdes and Isaac Fleming. Valdes lead the Warriors with 25, Fleming finished with 21.

Tech’s Devaugntah Williams lead the Raiders with 19 points alongside four other teammates who contributed double-digits.

Nevada decided to play only eight players out of its 16-man roster as Cal-State Fullerton goes deep into its bench to pull off the close game.

Although more depth is seen from the Titan bench it was the bench play of Nevada that kept the game close for the Wolfpack. None of the Nevada starters reached double figures, instead it was the guard play of Tyron Criswell with 11 points and Wolfpack leading scorer Eric Cooper Jr. with 19 points.

Tre Coggins continued his electric play as he grabbed Big West Conference player of the week honors with his second 25-point performance. For the second game in a row Coggins matched his career high in points.

It was Coggins who opened the scoring for the Titans in the second half with eight straight points as it never allowed Nevada to fully get back into the game.

It was the big men of UC Davis that led to a fairly easy victory over Utah Valley on Saturday.

Forward Josh Fox of Davis brought 13 points to the table with centers Neal Monson’s 17 points and Nolan Berry with a team-high 18 points. Berry came off the bench to secure a lead for the Aggies and drew many fouls against his size. Monson was the lone player in the game to record a double-double as he gained 13 rebounds.

Davis was just too big for Utah Valley as it collected 28 rebounds to the Aggies 37 total rebounds.

Four players on the Aggies side score double figures to put together a total team effort. Defensively Davis was on top of everything and allowed no points from the field, just two free throws the last four minutes of the game.

Forward of Wolverines Konner Frey did his best impersonation of a comeback star, at one point of the game Frey hit seven straight points. Frey led all Wolverines with 18 points.

A must win game for Cal-Poly SLO against a NAIA team in Antelope Valley. There was no doubt a NCAA Division 1 team was too much.

A 30-point win for the Mustangs showcased a tough defense as SLO tends to be and forced 14 turnovers. SLO held AV to only four three point scores all game.

The Missouri Valley Conference was well represented by Evansville as they took care of UC Irvine. UC Irvine is the preseason favorite out of the Big West and played poor against its mid-major foe.

For Irvine it's hit or miss with their big men, the pair of seven-footers in Mamadou Ndiaye and Ioannis Dimakopoulos combined for six total rebounds, all six from Ndiaye.

The lack of effort from the Anteaters was probably due to the consolation prize of fifth place in the Wooden Legacy Tournament.

A late push by Lamar was not enough in what was a lot closer than anticipated for UC Riverside on the road.

Up by 14 points at halftime, the Highlanders got too comfortable and let go the lead to four total ties in the game.

Senior guard Jaylen Bland put the game in his hands and took over for UCR in the last part of the game. Bland scored 10 points in the last six minutes and ended with 25 total points, a game-high.

This was a confidence booster to a team which picked up its first win on the road as it splits the Texas road trip 1-1. UCR came off a loss to Rice last Friday. Its other loss was on the road was at San Francisco.

The offensive rebound game is truly hurt with the loss to last year’s Big West Player of the Year "Big Al" Williams now overseas in China, playing for a Qingdao Double Star in the Chinese Basketball Association. Williams was a two-time leading rebounder in the NCAA in 2014 and 2015.

ASU picked up 16 offensive rebounds compared to only seven by UCSB.

The difference was the hustle plays, the UCSB team lost on an offensive rebound put back by center of the Sun Devils Eric Jacobsen. The final score from Jacobsen left 1.8 seconds on the clock, not enough time for even a shot by UCSB.

Jacobsen was clutch on defense prior to his game winner, blocking a shot that gave ASU the possession with 11 seconds.

UCLA punched the Matadors defensively, no CSUN player got into double figures. Three CSUN players got to nine points. The CSUN star of the game could be said to be guard Jason Richardson who finished with his nine points but filled his stat sheet with positivity, three rebounds, 4 assist and no turnovers.

Of the seven players used at UCLA, Richardson was the lone Matador without a turnover.