Chuck Ester Dribbles up the floor against ETSU's Lester Wilson

GREENVILLE, S.C.--Though the season is not officially over, I thought it would be good to take a look back at the moments that shaped what was one of the more exciting seasons in recent memory on the Southern Conference basketball hardwood.

Tragedies on the SoCon Hardwood:

Unfortunately, like everything in life, there's a good and bad part to each aspect of the human experience. If anything, the 2015-16 season will sadly be remembered by many for the losses of a pair of players. Jeremiah Tate of Wofford was lost this past summer in a drowning accident serving as a counselor at a local boys camp, and Mercer's Jibri Bryan was tragically murdered in early February outside a local convenience store in Macon, GA. From all of us here at Mid-Major Madness, we continue to send our prayers and condolences to those young men and their families.

The season will also be remembered for plenty of outstanding basketball, which saw the Southern Conference rise back into the competitive upper echelon of mid-major basketball conferences. When it was all finished, it was Chattanooga back in the Big Dance for the 12th time in program history and for the first time since 2009.

What Happens In Vegas May Stay In Vegas:

East Tennessee State won its opening round game of the Vegas 16, which really only features eight teams, and now moves on to play in the semifinal round of the tournament where the Bucs will face Oakland University in an 11:30 p.m. game scheduled for Tuesday night.

Ge'Lawn Guyn was able to extend ETSU's season at least another round of the tournament by pouring in career-high 34 points and notching his first-ever double-double, as the Bucs improved to 24-11 in an 88-83 win over Louisiana Tech Monday night.

The appearance in the "Vegas 16" Tournament marks the 14th time ETSU has competed in college basketball's postseason, and the Bucs certainly did themselves a lot of good with the win, generating momentum heading into the 2016-17 campaign.

Guyn, who also collected 10 rebounds in the contest, is winding down his career in Johnson City after transferring in from Cincinnati last summer. Deuce Bello (Missouri) and T.J. Cromer (Columbus St), who are two other transfers the Bucs have relied on heavily this season. Lester Wilson and Petey McClain are two other Buc veterans rounding out their respective careers in Johnson City.

Indiana transfer Peter Jurkin was big off the bench for ETSU in last night's win, pouring in 12 points in 18 minutes of floor action in the victory. Guyn's starting backcourt mate Cromer chipped in 12, while Desonta Bradford added 10 off the Bus bench.

Terriers Did Not Three-Peat, But Certainly Held Their Own Without Karl Cochran 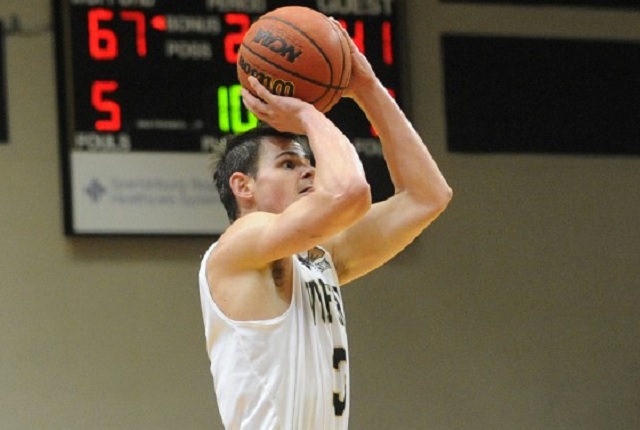 Wofford may have just finished its season with a 15-17 overall mark, but ask any team in the league and their ability to stay in most games this season with proficient shooting from long range was certainly a testament of just how good of a coach Mike Young is.

The Terriers will miss Spencer Collins, Justin Gordon and CJ Neumann, who all move on into their careers as successful Wofford graduates. But a young core of talent returns, led by Southern Conference Freshman of the Year Fletcher Magee, who posted what was an outstanding freshman campaign for the Old Gold and Black.

The native of Orlando, FL, ended up garnering SoCon Freshman of the Year accolades, and finished out the campaign ranking among the league's top 10 scorers (13.5 PPG), ranked fourth in the nation in three-point field goal percentage (47.5%) and led the nation in foul shooting (92.2%). Magee led all SoCon players with 85 triples this past season. His 15.1 PPG in league play this past season ranked him tops among the league's freshmen in scoring.

Meanwhile, the Terriers will certainly miss Collins, who finished out a stellar career as one of the ptogram's Top 10 scorers, finishing out his career with 1,696 career points, ranking ninth in program history and third in the Division I era in scoring for the Terriers.

You can expect Wofford to be back in the mix in 2016-17, despite some of the struggles it endured this season. The Terriers are a program that is built to stay in the mix every season as long as Mike Young is around at the helm.

Perhaps no coach will have a tougher time rebuilding what has been lost due to graduation than Larry Hunter of Western Carolina, who loses four key cogs as a result of graduation.

Mike Brown, Justin Browning. Torrion Brummitt and sharp-shooting Rhett Harrelson are all slated to graduate at the end of the spring semester. Those four players alone accounted for 52 of the 72 PPG the Catamounts averaged this season, with Mike Brown, who also garnered All-SoCon second-team accolades and NABC honors, leading the way with 17.0 PPG.

The quartet of seniors helped the Catamounts to a 16-18 overall mark and an appearance in the College Basketball Invitational (CBI), where the Catamounts were eliminated in the opening round by the only other team that goes by the same mascot in NCAA Division I college athletics--Vermont--as the America East version of the Catamounts posted a 79-74 win back on March 16.

The accomplishments of the 2015-16 Catamount squad, which made its first appearance in the college basketball postseason since 2010, certainly won't go un-noticed. Western rallied down the stretch of the season to garner a first-round bye in the SoCon Tournament, winning seven of its final eight games to post a 10-8 final league mark.

Playing a big role in the Catamounts' strong play down the stretch was Torrion Brummitt, who made the most of his final stretch run of games suiting up for the Purple and Gold. He posted double-figure scoring outputs in 12 of his final 13 games in a Catamount uniform, which included five double-doubles, en route to garnering second-team All-SoCon honors.

In the Southern Conference Tournament as the No. 5 seed, the Catamounts knocked out nemesis Wofford, posting an 88-83 double-overtime win over the Terriers to advance into the SoCon's Final Four for the fifth time in the past six seasons. The Catamounts bowed out in the semifinals, with a 73-69 loss to eventual champion Chattanooga.

Eleven of Western's final 12 games of the regular-season and postseason were decided by 10 points or less, with Western winning eight of those contests. No doubt Larry Hunter's prowess and know-how on the Catamount sidelines had more than a little to do with such improvement down the stretch. Along with Furman's Niko Medved, I would say that the coach of the of year in the SoCon might have been Hunter, who had to replace leading scorer James Sinclair.

Stay tuned for part 2 of the SoCon Season Recap coming up later in the week, as I take a look at the other seven teams in the league, provide a final set of power rankings, and take an early look at 2016-17 and how the campaign could play out.