Your graphical bracket and schedule for this year's Big Sky Championship.

Seven teams will descend into Ogden, Utah for the 2014 Big Sky Men's Basketball Tournament for games starting this Thursday.

Weber State, 14-6 in Big Sky play, has won the right to host the entirety of the tournament at the Dee Events Center. The Wildcats also earned the tournament's only bye into the semifinals.

The Wildcats won the regular-season title by two games, which is also the margin that ended up separating seeds two through seven. Parity was the name of the game in the Big Sky this season (unless you're Southern Utah, sorry T-Bird bros). The top seven teams of the 11-school conference qualify for the conference tournament.

Here is the graphical bracket and full schedule for the tournament: 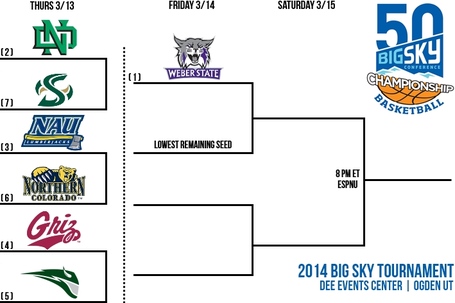 All games until championship game broadcast on Big Sky TV and on the Big Sky TV app for Android and Apple devices.

Bracket is re-seeded after first round