Is Jim Corrigan Pushing the Pace at Old Dominion?

Since Jim Corrigan took over for Blaine Taylor, something has changed at Old Dominion. The team is more competitive and is a couple of shots away from being 3-0 under its new head coach. So what got into the water?

Share All sharing options for: Is Jim Corrigan Pushing the Pace at Old Dominion?

When Blaine Taylor was fired, longtime assistant Jim Corrigan was inserted into his place. Before the move happened, we speculated that the place might not be a permanent home for Corrigan.

After all, the Monarchs are headed to Conference USA next season, and have the resources and facilities to draw a much bigger name to head the team. But through three games, including Monday's 75-73 loss to Delaware, the former assistant has the team playing much more competitive basketball. The results might still just be a 1-2 performance, but competitive is better than what was transpiring before.

Prior to the Monday game, a Mid-Major Madness reader named Dan asked us if we thought something had changed in regards to the pace of play that Old Dominion was playing at.

We weren't sure but a quick glance at the numbers sure seemed to say something. We plotted out the data from the last 10 games that Old Dominion has played through Monday. That includes three games in the Jim Corrigan era. The results are pretty clear (even if the overall sample size might be small). 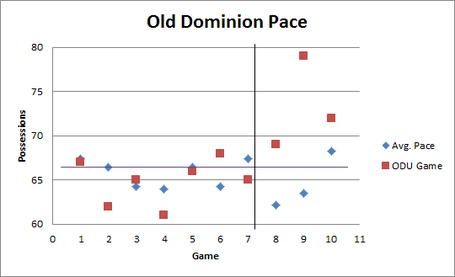 Ignore the names of the teams because they aren't important. Each opponent's average pace of play is shown by the blue diamonds while the possessions in the Old Dominion game are shown with red squares.

Old Dominion's average pace is given by the purple horizontal line (66.6) while Blaine Taylor's firing is shown by the black vertical line.

As you can see from the graph, from games one through seven, the opponent was mostly able to dictate the pace of play in their games against Old Dominion. The red squares fall fairly close to the style that the opponent prefers.

But then Jim Corrigan happened. Suddenly the pace of play has surged compared to where it was before. Old Dominion now seems to be the one deciding at what speed the game is played at.

Again, the results haven't been there yet, but more possessions have seemed to favor the Monarchs by letting the offense be more free-wheeling, and giving them more room to make up for mistakes. This led to a win at Drexel and then two competitive games against Northeastern and Delaware. It has also seemed to benefit DeShawn Painter by getting him more into a rhythm. His shooting percentage has been up in the past three games (and he is also padding his rebounding stats cleaning up the extra misses).

If this is just a blip in the season, it comes at a rather interesting time given the coaching change. If it isn't a blip, Corrigan has found a way to make his team competitive where Taylor hadn't. That should get him another good mark on his resume, and maybe swing our opinion as to if he can hold onto the job that he has been an assistant to for 18-plus years.

Blaine Taylor Out As Coach at Old Dominion