Who Are The Real SoCon Title Contenders?

Share All sharing options for: Southern Conference Pretenders and Contenders

I realize this is an article that John T. Roberts usually does, and I think he does an outstanding job of putting the rankings together each week. One of the first games that I will call to attention is the one that started off SoCon play back on Jan. 3, as The Citadel hosted Chattanooga in an intriguing clash, which would see the Mocs extend their winning streak to seven games with a hard-fought 84-78 win.

What About The Citadel: The Bulldogs blew a six-point lead down the stretch, fouled Greg Pryor on a three, and ended up losing a six-point game that maybe it could have won had it had two things: experience and a killer instinct.

The Verdict Going Forward: Sometimes losses in this league can be brutal to the psyche, especially for young basketball teams. We've seen it at other programs. Remember how one gut-wrenching loss would seemingly lead to another for teams like Furman and UNCG last year. It's exactly what seems to be happening to the Bulldogs this season.

Players like Derrick Henry (17.3 PPG--tied for league lead in scoring) and P.J. Boutte (6.1 APG) are nice pieces added by head coach Duggar Baucom and there's no reason why the Bulldogs can't be in or win any game with the style of basketball they employ. It's all about making shots for the Bulldogs, who sport both the league's worst scoring defense (52.1%) and scoring defense (92.2PPG). Every team the Bulldogs have played in Division I basketball this season has scored at least 80 points, with Butler scoring as many as a school-record 144 in the season opener.

Baucom's style of basketball is tough to play against, and it's sort of like having a spread offense that doesn't necessarily concern itself with defense as much as outscoring the opponent. The problem for Baucom becomes the fact that every team is now experienced in the SoCon and played VMI last year when Baucom was at the helm in Lexington. Baucom's Keydets hit the lottery big on some nights, like the program-record 24 treys in a blowout, 93-59, over Furman last February.

The Keydets, though, also saw the other side of that same cruel spectrum last season and how they could be punished for not employing a defense other than a press. Road games at Chattanooga, where VMI lost 86-64, or in their opening round game of the Southern Conference Tournament, when Mercer crushed the Keydets, 89-61.

It's Baucom's way and his style, and it's how he compensates when playing the more athletic and more talented teams in this league. It doesn't take a rocket scientist to figure out that three is more than two, but the problem is make a shot of a higher difficulty, while yielding shots of the least amount of difficulty. The Bulldogs are good enough to win some games and look good doing it, but to do it with consistency in this system, it will take some time.

What's Ahead: A monumental clash with Wofford in a Southern Conference rivalry game Monday night. The Bulldogs pulled off one of the SoCon regular-season shockers last season, when they handed Wofford one of its two regular-season losses last season, with Ashton Moore leading that remarkable run to give the Bulldogs one of few wins to savor in head coach Chuck Driesell's final season. The Bulldogs again have a player, in Henry, which can excite a crowd with his ability to score and create off the dribble, but Wofford is starting to hit its stride.

The Verdict: Pretender For Now

What About ETSU: We know about the Bucs, and we know about their history. We don't really know much about these gold uniforms, or what exactly they might provide on a night-to-night basis, but now that league play has started, more consistency has begun to take shape as Steve Forbes' club gains confidence playing with each other.

The Verdict Going Forward: T.J. Cromer, Ge'Lawn Guyn, and Deuce Bello remind us of some of the old Calvin Talford, Greg Dennis and Keith Mister Jennings moments from time-to-time. The new look Bucs are the only unbeaten team atop the league and still I have my concerns. No, ETSU is good, but how deep are they? The team that wins this league will have healthy depth, and if you look at teams like Chattanooga, Furman, Wofford and Mercer, all those teams have great depth.

That ETSU depth will now be put to the test, as for the second-straight season, the Bucs must overcome a serious in-season injury, losing all-conference guard A.J. Merriweather to a season-ending hand injury, which will require surgery. He was the team's fourth leading-scorer at 8.8 PPG.

What's Ahead: The challenges will begin Thursday with a trip to a smarting Samford team, which had many wondering if Scott Padgett's Bulldogs might be a potential league title contender, but after losing three of four on the road to Furman, Wofford and at Mercer, the Bulldogs will be playing like their title hopes and perhaps seeding hopes depend on it Thursday night at the Hanna Center. Then on Saturday, it's the biggest rivalry in the SoCon, and ETSU has to be thrilled that big-shot Ron is no-longer in town. It was Ronrico Rice's triple at Freedom Hall last season that broke Buc hearts. It will be interesting to see how this one plays out in in the Fox Sports Southeast Game of the Week at 5 p.m. Saturday night.

The Verdict: Solid Contender For Now 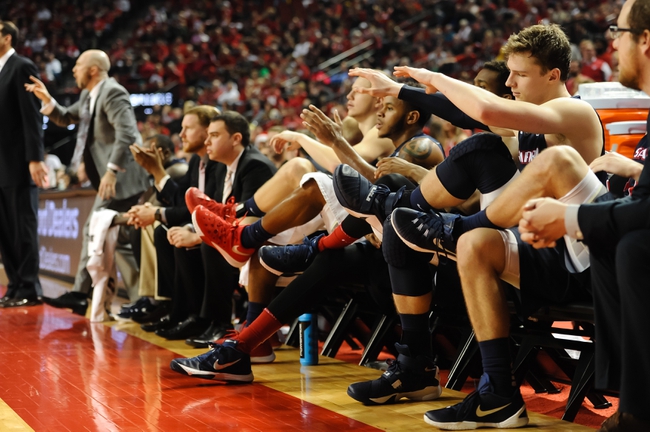 What About Samford: Things were good, and Samford was living in the moment just a few weeks back when they notched a big win over a big program, with a 69-58 win at Nebraska. The Bulldogs were the new flavor of the SoCon, and rightfully so, as the Bulldogs had given Nebraska a taste of the SoCon basketball with an 11-point beating in Lincoln. The Bulldogs also gave Texas a scare, and Scott Padgett's team wasn't scared of anything with its two talented guards, Christen Cunningham and Darius Jones-Gibson and low posts Wyatt Walker, Matt Rose and Iman Johnson proving to be a potential dark horse.

Then a SoCon slate, which started out with games at Mercer, vs. The Citadel, at Wofford and at Furman. The Bulldogs were handed their usual beating in Hawkins Arena, losing by 24 (80-56) to the Bears inside the toughest road venue in the SoCon over the past couple of seasons.

But a much stronger team was supposed to have stepped foot on the Bears' floor in Macon this season, however, once again Bob Hoffman's Bears were not interested in letting Samford stick around long, and though the Bulldogs had trimmed five points off of last season's beating, it still made the short trek back to Birmingham with a 69-50 defeat.

The Bulldogs took frustrations on the poor Citadel Bulldogs, who were eaten alive by the Talladega pressure employed by Padgett's men, and 26 points by Jones-Gibson, who led six in double figures en route to a 94-74 victory by the Birmingham Bulldogs.

They say sometimes one game can potentially lose two. By far the worst loss Padgett's Bulldogs lost this season was the game at Wofford last Saturday. The Terriers would end up winning what was a thrilling 69-64 decision at the Benjamin-Johnson Arena.

It should have been easy, right? A 64-55 lead over the defending champs, who many felt were not the same team that had won the past two league crowns must have seemed like a cinch. Ah, it's ok to take the foot off the peddle now because there's only 2:34 left, but Wofford didn't, and senior leader Spencer Collins provided the heroics like so many other stars in this league have done time after time before. Collins hit four threes and two free throws to score the game's final 14 points, Wofford's defense did allow any Samford points in the final 2:34, as the Terriers put one of the more remarkable stretch runs in a league game in quite sometime.

The gut-wrenching loss couldn't have come at a worse time either. Next up less than 48hrs later was Furman, who ended RPI No. 33 Chattanooga's eight-game winning streak with a convincing 70-55 win at Timmons Arena. The intensity of Furman was at a whole different level, and it with a boisterous crowd of lacrosse players on hand, it would eventually get the best of Padgett, who struck up a conversation, who remembered some of his past glories as a player at UK. It was all he had. Furman hammered Samford, 77-57, and the Bulldogs head into this weekend's game reeling.

What's Ahead: At least Padgett can rally the troops in the friendly confines on Thursday by hosting ETSU before Western Carolina pays a visit just 48 hours later. In my opinion, these are two "must-have" games for Padgett's club, or they might just lose total confidence and take a real tailspin.

The Verdict: Heading Up the middle of the Pack and not a contender at this point

Stay tuned next week for another three teams that I will dissect as pretenders or contenders in the 2015-16 SoCon regular-season title race.

Now for what we have all waited for--SoCon John's Power Rankings:

1. Chattanooga (14-3, 3-1)--Despite the loss, the Mocs are the team to beat in the league. Though this isn't quite the talent disparity that UTC exerted over its football foes over the past few years.

2. Mercer (12-4, 3-1)--Yes, I know Mercer got beat pretty bad at Chattanooga, but with Desmond Ringer and Stephon Jelks, Bob Hoffman's Bears will be trouble.

3. Furman (9-8, 3-1)--The Paladins are playing the best defense in the SoCon right now, and it's a question of learning to win on the road that holds this team back from even higher aspirations.

4, Wofford (6-10, 3-1)--Lost a crazy game to Chattanooga that it looked it was going to get blown out in before the Terriers made it interesting late. Mike Young will have his team there in the end.

5. ETSU (10-6, 3-0)--Yes, ETSU has been impressive, but I am a little shaky on putting them higher after the injury to Merrieweather. We'll just have to wait and see, but good performances at Samford and Chattanooga could move them to the top.

6. Western Carolina (7-9, 2-1)--Western is kind of like the brother you lose in Kmart only to find that he is already in the car waiting to go home. If folks take the Catamounts for granted, they are capable of making that championship drive from relative obscurity, and Larry Hunter likes it that way.

7. Samford (10-7, 1-3)--It's do or die time for Samford. They are a young team and coach Padgett has to figure out how to challenge his team without damaging their confidence completely. This weekend will be key.

8. UNCG (5-12, 1-2)--Ironically, it's Wes Miller's club that seemingly is in a better position than Samford. They have experience, a coach who knows that they will hit their stride soon because of experience. The Spartans already have a nice win over Furman.

9. The Citadel (7-9, 0-3)--How can you not like Duggar Baucom. A guy who knows about basketball, and his own personal story is one that is so inspirational. Baucom loves a challenge and he's never been one to stay down too long, he just needs the shots to start falling for his team this season. They will in time.

10. VMI (5-10, 0-4)--Dan Earl is one of the most intelligent coaches in this league and he's built for this job. He's had to teach a whole new system and it will take some time, but I bet Earl turns out to be the right answer for VMI in the long run. The Keydets are not as bad as the scores are indicating right now, but rather, just a little overwhelmed. They will eventually settle into the system come February.